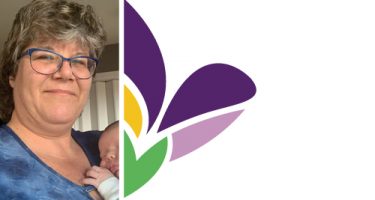 It was a normal fall morning as Jeanie Story from Swift Current was getting ready for work. Suddenly she thought she saw her dog behind her. She turned and looked over her shoulder. Then she remembered her dog had sadly died months earlier. A part of her knew this and still, she had to turn around. A couple of months later Jeanie experienced the same thought pattern and realized something was wrong. Jeanie made an appointment with her family doctor who sent her for a CT scan. Upon seeing the results, he quickly sent Jeanie to Royal University Hospital (RUH) where she met Dr. Mike Kelly in the emergency room. Jeanie had an MRI and received confirmation that she had a Grade 3 Oligodendroglioma brain tumour. “My family and I began to have many serious conversations, preparing for the worst-case scenario. Things that I thought were important all of a sudden no longer mattered,” Jeanie says. She continues, “Dr. Kelly, himself from small town Saskatchewan, used terminology and words that were easy to understand. This was so important to me and I will forever be grateful for what Dr. Kelly and his team did for me during and after surgery.”

Although she will have to have an MRI every six months to monitor her brain, thankfully Jeanie has recovered quickly from her craniotomy surgery and lives life to the fullest. She shares that her support for RUH Foundation’s Mission Possible: Operation New O.R. Campaign is personal; she most likely will need another brain surgery in her lifetime. Jeanie concludes, “Knowing RUH can have cutting-edge technology and equipment, like the Kinevo®900 Microscope because of donor support to the campaign, to complement their already best-of-the-best neurosurgeons will ease my anxiety as I try to keep on living in the moment.”