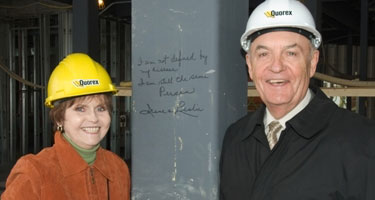 As founders of the Concorde Group of Companies, Irene and Leslie Dubé built a successful business and a reputation for giving back.

“Philanthropy feeds the soul,” says Les, and Irene agrees. “Sharing our blessings with others brings us great peace.”

In 2013, Leslie and Irene Dubé received the Award for Outstanding Philanthropists from the International Association of Fundraising Professionals (AFP). This is the organization’s top honour, and the RUH Foundation knows first hand how well deserved the award is.

“The Irene and Leslie Dubé Centre for Mental Health and Addictions has exceeded our expectations,” say the Dubés. “Our hopes and prayers for each and every person who comes to the centre is that they find the peace, solace and healing that their lives require.”