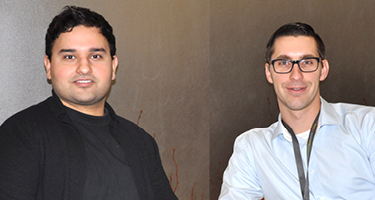 Drs. Dilip Gill and Nathan Ginther are revolutionizing colorectal cancer care for patients in Saskatchewan thanks in part to the generosity of donors to Royal University Hospital Foundation.

The two surgeons, who graduated from the University of Saskatchewan’s College of Medicine in 2010 and 2011 respectively, have introduced a new procedure at Royal University Hospital that is at the forefront worldwide of minimally invasive rectal cancer surgery.

Since July 2017, Drs. Gill and Ginther have performed 44 Transanal Endoscopic Microsurgery (TEM) procedures to remove pre-cancerous polyps and small early-stage cancers located in the lower section of the digestive tract. The procedure involves a “down-to-up” approach performed through the rectum using specially designed microsurgical instruments, thus eliminating the need for an abdominal incision.

“Patients spend less time in the OR, face fewer complications, have a shorter hospital stay, return much earlier to normal activity and don’t have to deal with the stress of going out-of-province for the procedure,” says Dr. Ginther.

Adds Dr. Gill, “Patients now have access to a new procedure that has some of them walking out of the hospital literally within hours of its being done.”

Colorectal cancer is the second leading cause of cancer death (following lung cancer) in Saskatchewan.

Support from RUH Foundation was instrumental in both specialists being in Saskatoon. Donor funds were invested in physician fellowship training in Winnipeg for Dr. Ginther and for the recruitment of Dr. Gill through funding of the province’s first TEM equipment.

“The fellowship funding took away a lot of the stress associated with acquiring my sub-specialty training,” says Dr. Ginther. “It was a big factor in my committing to return here to Saskatoon.”

Adds Dr. Gill, “We’ve accomplished a lot in these early years of our practice thanks to the support of RUH Foundation and your donors. There is so much promise for the future here . . . one that includes a vision for the creation of a multidisciplinary Colorectal Health Centre that will enhance health outcomes and patient satisfaction.”

Read more about colorectal cancer in this article from the Idaho Press.