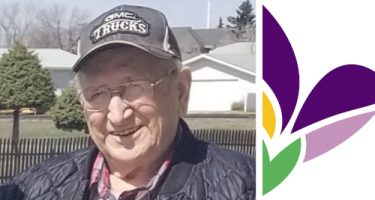 Walter Koob was born on the family farm in the R.M. of Viscount in 1928. He grew up on the family farm in the Meacham district and went to Lucasville School. In the winters, Walter worked off the farm at the Wheat Pool Flour Mill, Dash Brothers (a seed cleaning plant) in Kipling, Saskatchewan and several winters at the International Nickel Mines in Sudbury, Ontario. He really enjoyed working in the nickel mines, even though the work was dangerous and back-breaking. He always returned to the family farm in time for seeding.

Walter married Angeline Hering in 1955. They farmed in the Meacham/Bruno district and had two children, Lorne and Shirley. Walter, Angeline and Lorne farmed. Shirley moved to Saskatoon to work. When Lorne died in a tragic motor vehicle accident in 1988, Walter and Angeline had to rent out their farmland, but Walter was always very happy when a farmer would ask him to help work in the field. He always wanted to know how everyone’s crops were and was still a farmer to the end.

Walter and Angeline stayed living on their farm until 2000 when Angeline became ill. They then moved into Humboldt. After Angeline passed away in 2001, Walter enjoyed going to McDonald’s and A & W for coffee row.

During his 92 years, Walter saw many changes to how people worked and also to health care in Saskatchewan. Walter often talked about life prior to Universal Medicare in Saskatchewan, when the doctor had to be called to come out from Viscount to his parents’ farm near Meacham, and then paid for the medical visit. It would take quite a while for the doctor to arrive when he was using horses for transportation. (Medicare was born in Saskatchewan on July 1, 1962). Walter, his wife, Angeline, and his children, Lorne and Shirley always appreciated any medical care they received in Saskatchewan. During his lifetime, Walter had a number of surgical and medical stays in hospital and he always said “The nurses were all so good to me!”