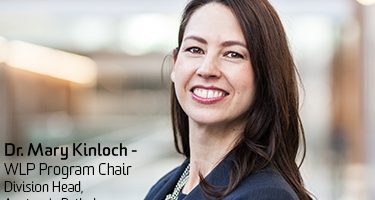 People in Saskatchewan will soon benefit from enhanced cervical screening with upcoming changes to the Saskatchewan Cancer Agency’s Screening Program for Cervical Cancer. Liquid based cytology (LBC) is being rolled out this summer across the province to replace conventional Pap testing.

“This is a more sensitive test and abnormal cells can be more easily detected. We can also use the same sample for other tests including testing for HPV,” said Dr. Mary Kinloch, Gynecologic Pathologist with the Saskatchewan Health Authority and Chair of the provincial Cervical Cancer Task Force.

LBC has several advantages over conventional Pap tests. Rather than placing the sample on a glass slide, clinicians will place the sample into a container with liquid to ensure the immediate preservation of the cells. This reduces the likelihood of unsatisfactory specimens or unknown results and the need for repeat Pap tests. Patients receiving a Pap test will not notice anything different during their appointment.

“Cervical cancer is preventable through HPV immunization, cervical screening and early detection and treatment. These screening enhancements will help to eliminate unnecessary deaths and disease in our province from cervical cancer,” said Dr. Winston Lok, Medical Advisor for the Screening Program for Cervical Cancer.

Each year in Saskatchewan, approximately 40 women are diagnosed with cervical cancer and 10 will die from it.

The World Health Organization has called for global action towards the elimination of cervical cancer. In 2020, the Canadian Partnership Against Cancer (the Partnership) released the Action Plan for the Elimination of Cervical Cancer in Canada, 2020-2030, with recommended actions for partner agencies across the country.

In Saskatchewan, the actions are being led by the provincial Cervical Cancer Task Force, which is a collaboration between the Cancer Agency, the Saskatchewan Health Authority, health care providers, provincial laboratories and patient partners. The move to LBC is made possible in part with $300,000 in funding provided by the Partnership.

“Regular cervical screenings using liquid based cytology will save lives, and reduce the number of invasive procedures for young women in Saskatchewan,” said Dr. Kinloch.