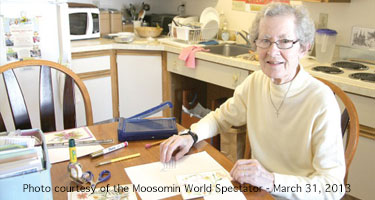 The idea of doing 10,000 kettlebells in a one-month period is quite a physical challenge, but it is possible. And a project that raises awareness about Parkinson’s disease, and provides a direct opportunity for people to financially support Parkinson’s research, is definitely a winning solution.

So why did Dave and Richard spend a month doing 10,000 kettlebells? Because they could. Why did they do it for Parkinson’s research? Because of Marilyn.

Marilyn Scutt is Dave and Richard’s mother. After she was diagnosed with Parkinson’s disease in 2006, she began looking for ways to support the fight against it. She makes and sells re-imagined greeting cards to raise funds. She organized a support group through Parkinson Society Saskatchewan. She entered a Parkinson Society Saskatchewan essay contest and won a trip to attend the World Parkinson’s Conference in Montreal. And, not least of all, in 2016 she inspired her family to start the 10,000 Kettlebell Challenge.

Even with Parkinson’s disease, Marilyn never wavered in her efforts to do whatever she can for others. Since the inaugural 2016 10,000 Kettlebell Challenge over $4,500 has been raised in addition to public awareness for Parkinson’s by showing participants that they can do more than they realize.

The 10,000 Kettlebell Challenge continues on! To follow along with Richard and Dave’s challenge, read their blog. And, if you’re not sure you’re up for 10,000 kettlebells, don’t worry—there are LOTS of ways you can participate. Because you can.

The Kettlebell Challenge has raised over $14,000 since 2015! You can always support the Dr. Ali Rajput Endowment for Parkinson’s Disease and Movement Disorders Research at Royal University Hospital. To make a donation, please contact the RUH Foundation at 306.655.1984 or make your donation online.